Yesterday I saw a poster shared on Facebook. The furthest I've been able to track it down is to a post on Asking for Consent is Sexy. It is the best sexual assault prevention poster I have ever seen. (I would love to give appropriate credit, so if anyone knows who created this, let me know.) 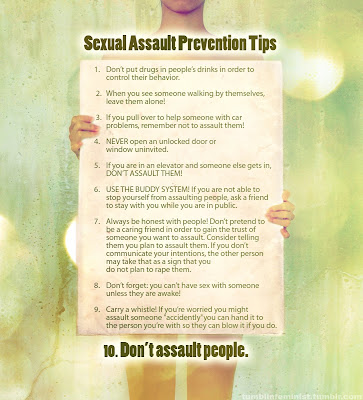 I think from the number of people who are responding so positively that others agree with me that it is about time this poster was created.

Every time I have heard about sexual assault prevention tips, it has been about what a woman can do to make herself less of a target and how to fend off an attacker. It's been about making the potential victim feel unsafe and powerless because they are female.

Finally, someone looked at true prevention: stop the perpetrators! If a woman dresses sexily, she doesn't deserve to be assaulted. She isn't "asking for it". Even if she is looking for sex, she's looking for consensual sex, not rape.

There have been several high profile cases recently that have been all about victim blaming and it pisses me off. Here are a bunch of people who seem to be saying that women need to be protected from themselves because they 1) dressed sluttily, 2) were drinking, 3) did something else that made them a willing target. I'm sorry, but in these cases it is the MEN who need to be protected from themselves and their misogynistic, paternalistic selves and their sense of entitlement.

We live in a society that generally objects to certain countries requiring women to cover themselves from head to toe. The rationalization on that, which seems to go beyond religious requirements from my limited understanding, seems to be that men are incapable of controlling themselves if they so much as see the tiniest bit of a woman's skin.

Seriously? If a man can't control himself, it is NOT the woman's fault. So let's stop blaming women. And let's start teaching actual prevention tips like number 10: "Don't assault people."

This is what I love about this poster; it puts the responsibility for preventing assaults on the people who have the most ability to stop them: the potential perpetrators.
Posted by Meagan at 2:47 PM