I've heard the opinion that one can't support the President because he did X, Y or Z, a horrible mistake. It strikes me as funny how the tables have turned and those who complained now rejoice and those who rejoiced now complain.

Do I think Obama is perfect? No, he's human. Do I agree with everything he does? No. Do I think he's in a tough spot, as is any US President? Absolutely. Do Presidents need to compromise? Yes. Are the choices sometimes bad or bad? Definitely. I wouldn't want to be responsible for some of the situations that happen. Is the President sometimes at the mercy of Congress (Congress actually writes and passes the laws!) Yep.

Every President does things that are good and things that are not so good. I think most have one thing in common: they want to make a difference and think they have good ideas to solve our problems. And some of those ideas sounds good but turn out bad in practice and vice versa.

I'm disappointed that some of Obama's goals have not been met. I think some are bigger than he imagined and will just take time. I think some are more complicated than they appeared. There are some that I wish he would follow through on. I never thought he was a Messiah, which seems to be the assumption of those who didn't support him about those who did.

I like the new Educate to Innovate initiative. Hey, the Mythbusters were invited to the White House for this! Having an intellectual, someone smarter than me, in the White House, is kind of nice. 'Cuz I sure don't know how to solve our problems.
Posted by Meagan at 3:25 PM No comments:

Saturday was a day of baking. I decided to try my hand at a molded, decorated cake for Wil's birthday this year. It is both harder and easier than I thought it would be, but I took a few pictures of the process: 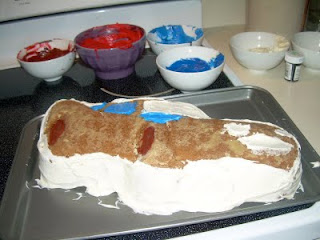 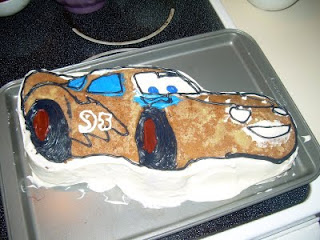 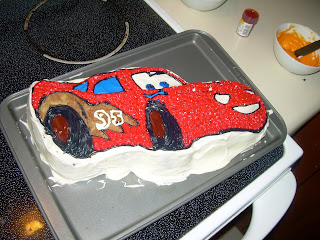 I started with baking the cake in the morning. I make spice cake for Wil's birthday and strawberry for Sam's so they each have a special cake until they are old enough to choose their favorite. After the cake cooled, I worked on icing it off and on all afternoon and finally finished around 8:30 p.m. Some of the markings (from the pan) didn't show well, so I had to freehand a lot of the design, so it doesn't look exactly like the picture; I also had one big goof, but I didn't notice until after I cleaned up so oh well! Overall, I think it turned out well and Wil loved it! 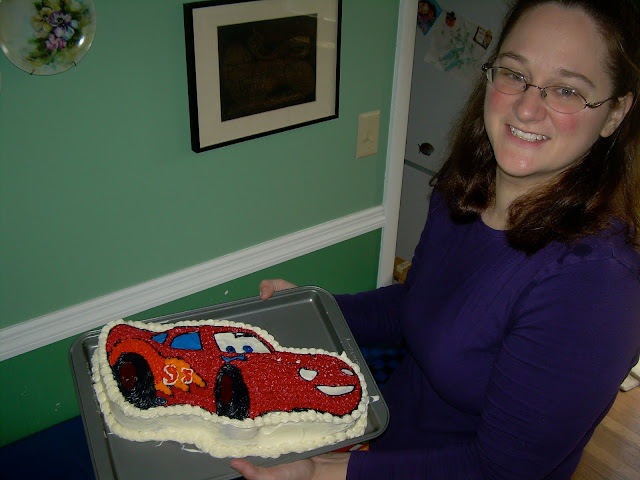 While the cake was cooling, I took the opportunity to try a recipe we had read about, Indian pudding. This is a corn meal and molasses pudding that is possibly something served at the first Thanksgiving. It's interesting and not bad, but not something I would make every day. Or even often.
Posted by Meagan at 8:49 PM No comments:

With New Moon in theaters now, I've been thinking about the whole Twilight saga again. I enjoyed the books and the first movie. I'm planning on seeing this movie. But I have a few concerns about the appeal of Edward to teenage girls - it must be the mom in me.

Edward is a stalker. Really, Bella didn't like him at first and if she hadn't decided he was the love of her life, she could have gotten a restraining order against him. He snuck into her room at night to watch her sleep. He followed her. If he weren't the romantic hero of the story, it was the perfect set-up for a horror story.

And then there's the whole Bella wanting to die thing. Life is precious. That she wants to throw it away because she can't imagine any experience that could be worthwhile is very sad and scary. Are we now encouraging young women to not live for themselves? That they have nothing unless they have a man? Education is only necessary if you don't have a rich guy?

And the whole Romeo/Juliet vibe. Why does every teen romance in pop culture need to involve the melodrama of "I can't live without you. I'll [literally] die" and then often follow through? Really, breaking up hurts, but it isn't fatal. Lovers throughout history have parted and survived the ordeal, usually gaining wisdom and learning from the experience, painful though it may be. Wouldn't it be better to show teens how to survive a break-up?

I have to say I'm on Team Jacob in this one. At least he's still alive! Or even Team Human Guy. (I do have a soft spot for Jacob and wonder what the series would have been like if he got Bella in the end.) The fourth book in the series was my least favorite. I found the themes disturbing and actually thought it seemed familiar - maybe Anne Rice's Mayfair Witches series? I really think one of those involved a similar type of birth, but I haven't re-read to verify.

All that being said, as an adult who is capable of separating real life and fiction, I really did like the books and found myself escaping into the travails of Bella, Edward, and Jacob. I laughed and cried at the appropriate moments (with an occasional cringe as my inner adult jumped in.) I just hope all the teenage girls going gaga over Edward understand that romance shouldn't be that traumatic. And death is never the answer.

Update: There is a good review of the New Moon movie here that identifies some of the same type of themes I found disturbing.
Posted by Meagan at 8:18 PM No comments:

When it's time to call it quits

I've spent a lot of time and energy over the last year trying to make a moms group function well. Last November, the Moms Club of Bloomington - East disbanded and created our own club, the Moms of Bloomington. We tried to make things work better than they were, but unfortunately it didn't work. We made the decision to disband the group and it is now officially over.

It's a relief for me in a lot of ways. I feel like I put a lot of work in for no reason. A lot of moms kept saying they wanted us to keep the group going and they were excited, but they never went to events. It is extremely discouraging when you plan something and no one comes. Especially when someone responded that they would. There were many times when I might have preferred to stay home if we were having a bad day but went out because someone else was supposed to be there... only no one showed up. It's frustrating.

I'm kind of mad that so many people said they were going to participate but didn't. I would be less upset if people could admit they didn't have the time, desire, energy, whatever, than to talk a good game and leave me hanging. Just tell me you can't do it! It hurts less to hear 'no' than to hear 'yes' and see 'no'.

Luckily I am in another moms group that is very functional, with a lot of active moms. I'm happy that I've met so many nice moms and kids through both groups. And now it's time to let the past rest and move on. I only have one calendar to figure out now, so that's a big plus.
Posted by Meagan at 10:07 PM 1 comment:

Today is Veteran's Day, so I think it appropriate to post a thank you to all the men and women currently serving in our armed forces as well as those who have in the past. I've known people in various branches of service, including some in the family, and appreciate the efforts of all who serve.

Have you used an Automated Postal Center lately?
When I am done making a purchase, the machine always 'asks' politely whether it may help me further. I may be weird, but in my mind, I always think 'no, thank you'. The options are, of course, 'yes' or 'no'.
Which makes me wonder if more automated machines used standard polite options, would people start to pick them up? Granted, it's probably not going to change the world, but a little more politeness in the world can't be a bad thing.
That is all. Thank you for taking the time to read my thoughts.
Posted by Meagan at 3:11 PM No comments:

The joy of a pile of leaves

I raked leaves in most of the back yard late this afternoon, with 'help' from the boys. They had a lot of fun playing in the piles. 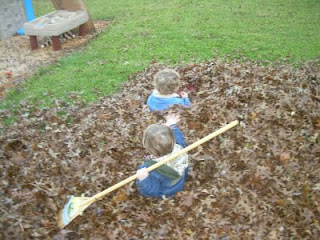 Watching them have such fun made raking a lot of leaves more enjoyable. There were a lot fewer than before we took down the rotting maple (I'd say about 1/3 as many).

They had so much fun sitting in the leaves, getting dirty and damp, not worrying about bugs. There is such joy in that innocence and naivete that we lose as we grow older and think about all the possible icky things (or dangers if we extrapolate).

Having kids is a great reminder that clothes clean and so do we. Enjoying the moment is something I would like to strive to do more. We have a pretty good life and are learning to be satisficers rather than perfectionists, so I think that will help. But one of the best ways I know is to look at the world through the eyes of a child. It's a cliche because it's true.

Posted by Meagan at 8:31 PM No comments: