A lot of people talk a lot about what's wrong, usually according to the precepts of their religion. This list includes gay marriage, abortion, and any number of other hot button topics. In all the hollering about "Christian values", it seems a lot of self-proclaimed Christians forget what's right: compassion and kindness.

When the moment comes to show true kindness, so many people fail.

What do you do if someone you know is homeless? Do you take them in or tell yourself that's what homeless shelters are for?

What do you do if someone you know is hungry? Do you feed them or tell yourself that's what soup kitchens are for?

When millions of people are living in poverty, without enough to eat, without reliable shelter over their heads, without healthcare, what do you do? Do you shrug and decide they must be lazy? Or do you do something about it?

There's a saying: "There but for the grace of God go I." One bad turn could put a lot of us in unfortunate circumstances.

Just something to think about.

My parents taught us to help people if we could. They've let friends stay with them when they've needed a hand getting back on their feet, despite being told they were inviting trouble in (they've never had trouble). I remember my mom spending hours on the phone or on the porch listening to an aunt with mental illness talk about.... well, she wasn't always terribly rational or lucid, but she was harmless and nice.

We've tried to do what we can to help. Yes, sometimes we've been burned, but we've tried.
Posted by Meagan at 5:03 PM No comments:

I am obsessed with "Eureka". I was late to the party, but diligently watched three and a half seasons of episodes to catch up. There are so many rich, fun characters in the show- to me, that's what makes a great show. But the one character I am increasingly enjoying is Jo Lupo. She is a great role model, something increasingly seen in sci-fi's female characters. (WARNING: THERE MAY BE SPOILERS IF YOU HAVEN'T SEEN THE MOST RECENT EPISODES.)

Jo is such a complex character. She's a 'real' woman, not a stereotype. While she may have started as a single-note - gun-crazy, hard-ass, special forces - she's really developed over the four seasons. I am sure a lot of the credit for that goes to Erica Cerra.

What do I love about this character?

First, she is strong, both emotionally and physically. She was an Army Ranger and can kick serious butt. We've seen her take on several opponents and win (or at least hold her own). We've also seen her deal with pain, loss, and heartbreak without turning to a weepy pile of goo. There are so many female characters on tv and in movies that turn into the stereotype of the helpless woman when a man is involved.

And that brings me to her relationships. She has them (both romantic and platonic). She's had several boyfriends throughout the series, but isn't defined by her relationship to them. Her relationship with Taggert brought out a new side, with her sunbathing in the buff, something unexpected for a character seen as tight-laced up until then. I think that's when I really started noticing that she had more dimensions.

She and Carter are friends. Period. They lived together briefly after her house was destroyed and nothing happened. How cool is that? Because a lot of shows would use a set-up like that to force sexual tension. Having her be just friends with men is what real life is like. (Really, being alone with a man doesn't mean anything happens.) The ease of their friendship, their trust, their occasional arguments, those are what make it 'real'.

And then there's Zane. I admit, this is my current favorite story arc. We've seen Jo flirty, vulnerable, angry, pissed off, deliriously happy, devastated, and a whole range of other emotions with Zane. She hasn't changed herself for him (big feminist point in her favor there) and even gave him up when the paradigm shifted (I'm so glad he is trying to find out what they were). He's a good match for her since she's such a strong character. He challenges her and she brings out the best in him. He knows she can beat him to a pulp and finds it sexy rather than intimidating. She was briefly insecure about his intelligence until she realized she has a different kind of smarts.

And those smarts, let's talk about that. She is a very able investigator, especially in a town like Eureka. She may not know all the science, but she knows how to ask questions and put the pieces together. She's creative (note the season 4 episode "Liftoff" for an example; she gets around pretty well when the town loses all power). She wouldn't be a good deputy or head of GD security if she was just brawn; she has the brains to back up her position.

So, we have a woman who loves guns, knows how to fight, has relationships, can think for herself. And let's not forget beautiful, because sometimes the price to pay for a woman on tv having brains is to be mousy. Pretty well-rounded, in my book. I increasingly look at characters from a feminist stand-point; I think a lot of that has to do with feminist ideals in characters matching more with well-rounded characters. I think Jo Lupo wins on both counts. She's someone young girls can look up to and someone who would make a great friend. She can fall in love and talk about more than men.
Posted by Meagan at 2:00 PM 2 comments:

It is pretty much acknowledged that the current state of education is not great. I don't know if I'd go so far as calling it abysmal in general, but there is so much to be sad about. There have been articles and articles and more articles written about the loss of creativity and innovation in education, about how our children are learning rote information to pass a test but not the skills needed to compete in the 21st century.

There are lots of ideas about how to change education. There are even alternatives to traditional public schools. There are several options even in Bloomington: Harmony School, The Project School, New Tech High School. I think it's great there are alternatives here.

But. I think our family is in a similar position to a lot of people in town. We just can't afford to pay tuition for 13 years of elementary, middle and high school. New Tech is part of MCCSC, but that's a long way away. Harmony School sounds wonderful, but when we've scrimped to afford preschool and have to save up for college, and we have tax dollars paying for the local public schools... well, 8% of monthly income for 1 kid or 12% for 2 is just more than we could swing.

And there are those tax dollars we are paying for our public schools. Are they perfect? No. Do they need improving? I'd say yes. But I want to see some of the innovations of private alternative schools, at least the ones that are doing a good job, be incorporated into our public schools rather than just see those who can afford it jump ship leaving a sub-par education for the rest of us.

Can we recognize that all this testing and teaching to the test is not the answer? We've tried it and survey says it's not working. Can we actually work to fix our public schools? Private, charter, alternative or religious - all these other schools aren't necessarily better. Some are and we need to look at what works. Some aren't and we need to learn from that too.

But this system is broken. And my kids will be starting school in the next couple of years. I just hope we can inspire them to be creative and explore and find science and art and music and all the stuff that's lost these days fascinating. I'm thankful we have things like Mythbusters to show them that science can be fun and Khan Academy to help them when their teachers are too busy trying to control 30 kids. We have resources in town because of IU and Ivy Tech that will hopefully inspire the boys.
Posted by Meagan at 11:27 AM 2 comments:

Ain't it the truth

Because it is so true, I must share today's xkcd webcomic. I can't tell you how many times I've been home all day and missed a delivery or service call. And for those not familiar with this brilliant webcomic, there is always an extra treat if you hover your mouse over it (although I don't know if that is only on the xkcd site). 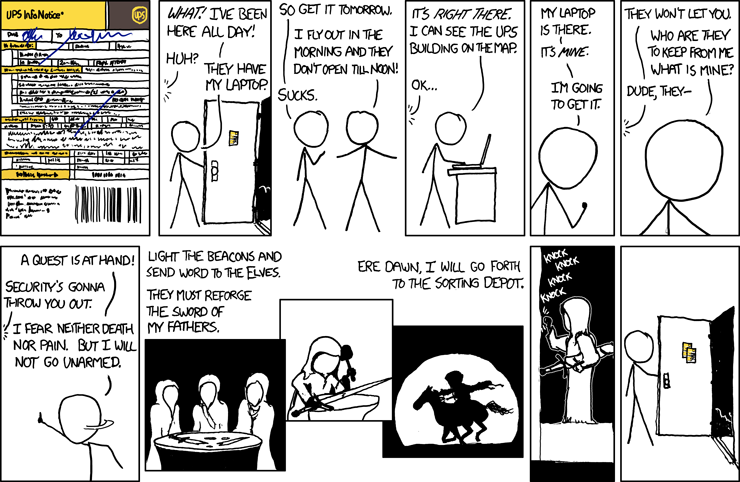 Posted by Meagan at 1:25 PM No comments: