We're very happy that the boys seem to love reading as much as we do. They love to 'read' on their own or ask us to read to them. And they definitely have favorite books. It probably helps that they see us read all the time. Books are very important to both of us.
Wil loves:
Sam loves:
I know they have lots more. I highly recommend picking up some of Karen Beaumont's books. They are extremely entertaining. "Doggone Dogs" is hysterical (and teaches counting). Another of hers that we have and enjoy is "I Like Myself". It has a message that we all could learn from. I'd really like to pick up more of her work. Eric Carle, of course, is excellent. Along with getting more of his books, I want to visit the Eric Carle Museum of Picture Book Art in Amherst, MA.
Some of our favorite authors that we are introducing the boys to include Dr. Seuss, Mercer Mayer, Richard Scarry, Jean and Laurent de Brunhoff (Babar), Corduroy by Don Freeman.
What are your favorite children's books/authors?
Posted by Meagan at 3:55 PM No comments: 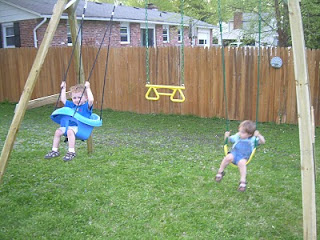 We have great neighbors here.
Posted by Meagan at 2:32 PM No comments:

I've decided to participate in the Bloomington Homeward Bound 5K walk next Sunday. I've wanted to do a walk for a while and this seems like a good one to start with.

1) There is no minimum donation to enter. So if I raise $20, I can still do it. Some walks want a minimum.
2) They are family friendly. Some of the walks don't seem to encourage moms with kids in strollers.
3) All the money stays local and goes to local agencies that help the homeless.
4) We've been concentrating our limited funds for charitable donations to local food banks and homeless shelters for the last few years. While it's great to cure diseases, that doesn't do much good if someone doesn't have enough to eat or a place to sleep.

So, if anyone would like to donate to my team, or join my team, I would appreciate it. If not, that's cool.

Some helpful links: Team Eller donation page and Homeward Bound Bloomington.
Posted by Meagan at 10:27 AM No comments:

A few things have conspired to put race/ethnicity in my mind. I guess my thoughts here apply to a lot of differences that people use to separate groups into 'them' and 'us'. Does it really matter what the 'other' is?

I recently read The Help by Kathryn Stockett for book club. A major theme of the novel is race relations. It takes place in Jackson, MS, in the early '60's. At the discussion, one mom brought up the idea from a book she'd been reading that we all need to talk to our kids, as young as 3 and 4 year olds, about race. Another mom, who happens to be African American, talked about how she actually did that with her older daughter, which helped with schoolyard confrontations. A third mom mentioned that she doesn't even think of herself as Asian unless someone points it out to her. And yet another mom who works at a school for children with learning disabilities pointed out that they really strive to not define the children by their difference: they have dyslexia, they aren't dyslexic. Interesting distinction.

Last night I watched an interesting movie, Dancing in September, which follows a fledgling show at a fledgling network. There is a lot more to the story, but the show is about black characters, written and produced by a black woman, at a network that is trying to appease activists because of backlash about the lack of representation for African American actors on tv. It's a really good movie and I recommend it if you want to see a little of what happens to shows we love. Because the show starts as a really good, heartfelt show and slowly becomes that cliche of dumb black characters through suggestions from the network. Because it's all about ratings and keeping advertisers happy.

One of the things that irritates me about a lot of 'ethnic' shows in the last decade or so is that the characters are all caricatures. It doesn't seem to matter if the show centers around a black family or a Latino family, they all seem to have to be dumb. (That's actually even true about comedies centering around white families.) Why do people watch that crap? And why can't we have more shows where the characters just happen to be black/Latino/Asian or whatever? Seriously, the reason The Cosby Show was so good and popular was because the Huxtables could have been any family. They just happened to also be black. It was funny. It was heart-warming. That's what I miss about family comedies.

There is some hope with dramas. At least characters are allowed to be real, normal, and not stupid. I admit I don't watch much tv these days. Between getting the boys in bed and the late schedule, I find too many shows start to feel like a chore. The only serial series we watch regularly are Castle and The Big Bang Theory. Mythbusters, Dirty Jobs and Man Vs. Food are other shows we watch, but it's ok if we miss an episode. So there may be some quality shows out there that I just don't know about (and please feel free to leave suggestions in the comments.)

But back to the topic. First, what is the difference between race and ethnicity? Because I think race is a loaded word used purposely to highlight something that is really a matter of ethnicity. Here's an interesting chart that points out one of the major issues for me: race is defined by governments, not science. And my background is science. The government in the US defines race by skin color, but not all skin colors.

Wouldn't it be nice if we didn't define people by their ancestry? Or by their difference from us? Can we get to a point where someone is a person who happens to be (fill in the blank)? I know it's idealized, but maybe if we all try to change how we talk, we'll change how we think. And if we can't change how we think, maybe at least our kids will think in that idealized way. And maybe one day people will be so mixed (multi-ethnic or multi-racial is a growing demographic as it is), it won't be an issue.
Posted by Meagan at 4:51 PM No comments:

Walk a mile - or two or three

I've been trying to walk a lot lately. It's a form of exercise I can do with the boys (put them in the stroller or wagon and go), plus I hate running and 'working out'. And adding exercise is good for me because it improves my health plus it has the added benefit of possibly losing a little weight or at least toning and slimming so my clothes fit better. I'm not very good at dieting - and that only works on half the issue anyway. Plus, I like food.

I push it when I can, trying to make my walks actually work even if I'm going slow. Thursday I walked to Petco to pick up cat litter. It's about 1.5 miles from home and I was pulling about 50 pounds of toddler in the wagon. Add the 40 pounds of litter on the walk home and the sore muscles are understandable.

Here's the thing: after that walk, I put on a bra and realized it was way too loose. I know that walk alone didn't do it, but it was gratifying to realize that I'm losing some of the fat around my ribcage. (For the record, I lost the girth not the cup size.) I also have dropped 1/2 pound. If this keeps up, I'm well on my way to hopefully having more energy and being healthier.

I'm tired of being tired and I really don't want to have to take daily medication any sooner than I need to, so losing a little weight and trying to be fit is a good way to get there. I should be able to walk 3 or 4 miles easily. I want to get to where my hips, knees and/or back don't hurt at the end of the day.

Aging is inevitable, but I can do it in a better way. I can minimize the damage and hopefully one day become a crusty old broad full of spirit rather than fade away. Yes, there is much more I could do. I could eat better (I'm trying, but I will never be a vegetarian or be able to give up pizza and chocolate.) We try to control portion size so we can eat what we want, just in moderation. I try to eat a lot of fiber (raisin bran is a great source and the boys love it too.) I try to be somewhat aware without being completely paranoid.

I want to LIVE, not just endure. And enjoying a good meal is part of that. So is feeling good and being able to do rather than just watch.
Posted by Meagan at 4:57 PM 1 comment:

Did I mention I'm addicted to reading?

So here's an update on my earlier list of books to read.

On my reading list:
Posted by Meagan at 12:17 PM No comments: